There has recently been a significant rise in the theft of catalytic converters from vehicle exhaust systems.

For all of you that don’t know what a catalytic converter is, it is part of your vehicle's exhaust system. These converters were mandated for all U.S. cars and trucks in 1975, to convert harmful pollutants into less harmful emissions before they left the exhaust system. Precious metals such as platinum, palladium, rhodium or gold are used as the catalyst. The recyclers then extract the metal and resell it for as much as $6,000 an ounce, as in the case of rhodium. While national theft figures are not recorded for catalytic converter theft, the crime has risen in tandem with sharply rising metal prices according to multiple police departments across the United States.

The Appeal of Catalytic Converters

The reason is the value of the metals used in the manufacturing of the catalytic converters. Catalytic converters contain platinum, rhodium, and palladium. The metals are expensive, and thieves sell the converters to scrap yards for several hundred dollars per piece, depending on the size of the converter and the current rate on the metals inside it. It can cost you on average of $1,000 to $2000 to replace a catalytic converter, and it is illegal to drive your car without one. The resulting gap in your exhaust system also makes the car run poorly until it is fixed. 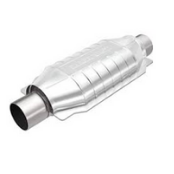 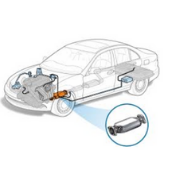 You’ll notice a loud rumbling or roaring sound as soon as you turn on the engine if your catalytic converter is missing. This gets louder when you hit the gas. The exhaust is not working properly, so the vehicle also drives rougher than usual, often with a sense of sputtering as you change speed. Go to the back of the car and look underneath. The catalytic converter is a round canister that connects two pieces of piping in the exhaust. You will see a gaping space in the middle of your exhaust if the converter is missing, and you will likely see signs of the piping being cut away.

An Easy Grab and Go

Thieves can remove a catalytic converter quickly, often in less than two minutes, so theft can even occur in broad daylight. The only tools a thief needs are a wrench (for converters that are bolted on) or a reciprocating saw (for converters that are welded in). Some thieves bring a mechanic's creeper. Then all they do is slide under the vehicle, remove the bolts holding the converter, and take it. Thieves can remove the unit within a minute or two.

Typically, catalytic converters are stolen from cars and trucks in driveways, strip malls or in parking garages. The most hit vehicles are SUVs and trucks, because they sit higher off the ground (making for easier access) and the bolts that connect the converter are easily removed.

Train your employees to always park in well-lit areas when possible. If you have a garage, keep your car in the garage with the door closed when the vehicle is not in use. Park close to a building entrance or to the nearest access road when parking in a public lot. This is due to the increased amount of pedestrian traffic in those areas.

Some mechanics suggest welding the heads on the catalytic converter bolts — or simply shearing them off. Or having the converter welded to the car frame also makes it more difficult to remove.

Security devices are available that attach to the converter, making it harder to steal. The aftermarket has responded by designing products to deter and prevent catalytic converter theft. The idea behind such devices is that if it takes too long to make the steal, the thieves will move on to easier pickings. For example, the CatClamp is a hard-to-defeat cage installed around the catalytic converter. This product can be installed by a mechanic or at home with an included specialized tool and is backed by a money-back guarantee.

If you have a security system on your car, calibrate it so vibration sets it off. This ensures the alarm activates if a thief tries to saw off the converter.

Video surveillance around your building is also useful if you have the budget for it. 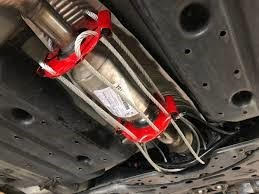 Engrave your VIN number onto your catalytic converter to make it easier to identify in case it does get stolen.